Written by: Sophocles,
New translation by: U. S. Dhuga
Directed by: Michael Page

Though produced first around 442 B.C., Antigone is chronologically the third of the Theban trilogy, which is completed by Oedipus the King and Oedipus at Colonus. This specially commissioned new translation by Calvin classics professor U. S. Dhuga will be the first production of a Greek play by the Calvin Theatre Company in almost 20 years. Come and Experience the power–and the relevance–of one of the greatest plays ever written which asks the age-old question: “Can the moral duty of the individual and the moral duty of the state be reconciled?”

Antigone, daughter of Oedipus, disobeys the orders of Creon, king of Thebes, who forbids the burial of her brother Polyneices, a traitor to the city. After Antigone buries Polyneices, Creon condemns her to death and has her buried alive in a cave. Though warned by the prophet Tiresias, Creon sticks to his decree. Creon eventually yields and decides to free Antigone but he arrives at the cave too late — Antigone has hanged herself and is already dead. Creon’s son, Haemon, who had been engaged to marry Antigone, is enraged at his father and, failing to kill him, kills himself. Creon’s wife, Eurydice upon finding out that her son is dead also kills herself and curses Creon. Creon is left at the end of the play realizing his inflexibility and refusal to compromise has cost him his family and everything he holds dear.

More information can be found at the Calvin Theatre Company Website.

Experience the kind of melodic and suspenseful drama only opera can deliver! A witch burned at the stake, a doomed love triangle, counts and dungeons abound in this tale of the gypsy hag’s lifetime quest for revenge. Lavish melodies like the famous “Anvil Chorus,” and powerhouse arias that stretch the limits of the human voice make this Verdi masterpiece a must see.

For more information on the opera (including an audio guide by Maestro Robert Lyall,) go to www.operagr.com

From the Woodrick Diversity Learning Center:

Jeannette Walls is author of the memoir, The Glass Castle, which has been on the New York Times best-sellers list for over three years.  The book details Walls’ life growing up in extreme poverty and describes the unimaginable obstacles she faced. From the desert of the Southwest to her parent’s later homelessness in New York City, Walls’ account of an impoverished life is a compelling testament to what it means to be poor. Jeannette Walls is also a journalist whose work has appeared in New York Magazine, Esquire and USA Today.

Filed under Around Town, Communication, Events 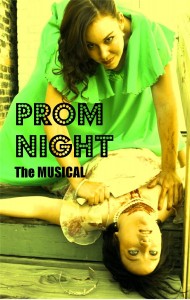 In 1974, three children played a dangerous game of tag, ending up with the death of a little girl, Elizabeth Bacon.  The three swore they’d never tell, but someone saw.  Six years later, as the school prepares for the prom, those three homicidal children start receiving creepy phone calls and suspicions arise.   As the big night approaches, the three start dying off, one by one.  For everyone at Grover Cleveland High School, it becomes a prom night that no one will ever forget.

Performance dates are October 26 -31 with curtain at 8:00 pm.  Wednesday, October 26 tickets are half off!  There will also be special midnight showings on October 28 & 29 and a Costume Contest and party with refreshments, prizes and dancing on Halloween night, October 31 at 8:00 pm.

RATING INFO: This show contains adult language, simulated drug use, mild sexual behavior and murder/mayhem set to music.  We suggest a rating of NC-17 or with parental guidance.

For more information about the Stark Turn Players, go to www.starkturnplayers.org.

For more information or to purchase tickets, go to Dog Story Theater’s website.

Get Healthy and Support Actors!

Our friends at West Michigan Spine and Wellness (Facebook) have come up with a splendid offer to help you get healthy – and support Actors’ while doing so!  Schedule an Holistic Welness Exam and 50% of the proceeds will be donated back to Actors’ Theatre!   Whether you are in need of chiropractic care, general pain relief or wellness care, chiropractor and holistic medicine expert Dr. Michael Dubiel and his staff will use their skills to instruct you in the many techniques necessary for you to feel your very best – in and outside of their office.  As they say, “Feel great, live pain free, and above all be happy!”

Click the image below to download and print the coupon and be on your way to better health – while supporting Actors’ Theatre in the process!