Of course, there is also Final Dress tonight only $5 tickets!

If you don’t have your tickets for this one, get them fast!  www.atgr.org 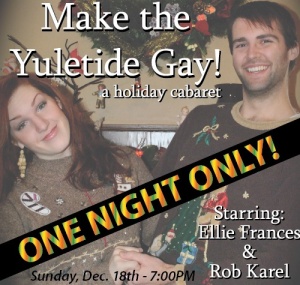 This holiday cabaret is unlike any you have seen before. With songs you love and laughs you won’t expect!
This old fashioned cabaret is infused with modern medleys and showstopping vocals that is sure to make your season bright!”

Check out this article about Actors’ Spring Awakening in The Grand Rapids Press:

GRAND RAPIDS — Winter hasn’t officially begun yet, but spring is in the air at Actors’ Theatre.

“Spring Awakening,” a rock musical that took the 2007 Tony Awards by storm, opens Thursday and will run three weekends instead of the usual two because of heightened interest in this controversial tale of sexual discovery.

“This isn’t ‘The Wizard of Oz,’” said director Fred Sebulske, “but if you are under 21, you know this music. This is your ‘Hair,’” he added, referring to a controversial rock musical of the ’60s.

Based on a Frank Wedekind’s 1892 German play, “Spring Awakening” straddles two centuries. The story is set in Germany at the beginning of the 20th century, but the music is definitely 21st-century rock, and the lyrics even make anachronistic references, such as “turn on the stereo.”

Read the rest of the article on www.mlive.com. Spring Awakening opens December 1.  Tickets for are on sale now (and going fast!) Get your tickets at www.atgr.com.

A beautiful memoriam to long-time friend of the Arts, Martha VanderEyk, can be found on the home page of the Grand Rapids Women’s Chorus. Services will be held at Fountain Street Church on November 27, 2012.

From The Grand Rapids Press:

VANDEREYK – Martha VanderEyk was born in Schipluiden, the Netherlands on February 21, 1942. She immigrated to the United States with her family at the age of six. She lived all her adult life in Grand Rapids. Martha, 69, passed away peacefully on November 15, 2011, at Faith Hospice at Trillium Woods in Byron Center, Michigan. Martha is survived by her partner of 37 years, Leslie Kohn; her son, Maurice VanderSluys; her sisters, Coby Bristol (William) and Corrie Kirshman (William); cousins, nieces, nephews, and many friends. Martha graduated from Kalamazoo Christian High School, attended Calvin College, and graduated from Grand Valley State University with a BA in Music. She had a beautiful soprano voice. Martha was the Business Manager for Community Counseling and Personal Growth Ministry (CCPGM) for thirty years. While still working at CCPGM, she began teaching private voice students in her home studio. She continued teaching voice after retiring. Martha was a talented teacher who was very proud of her students and their accomplishments. Martha was one of the founding members of the Grand Rapids Women’s Chorus where she sang in the soprano section and directed the Small Ensemble. She loved working with this group of singers and was very proud of their beautiful sound. Martha loved gardening and flowers – especially roses, walking in nature, bike riding, and swimming. She had a special love for walking on the beach at Lake Michigan and loved to travel and explore new places. Martha gave generously of herself to many and will be greatly missed. A memorial celebration service for Martha will be held at Fountain Street Church, 24 Fountain Street NE, Grand Rapids, Michigan on Sunday, November 27, 2011 at 4:00 p.m. A reception will follow in the social hall. Please join us. In lieu of flowers, donations may be made in Martha’s name to the Grand Rapids Women’s Chorus, P.O. Box 68486, Grand Rapids, MI 49516 (online donations accepted at www.grwc.org).

Tagged as Friends of Actors

2012 marks the ninth installment of the Actors’ Theatre annual 10 minute play festival, Living on the Edge.  We cordially extend an invitation to interested Michigan writers to submit a script for consideration.

The deadline for scripts will be March 1, 2012. Actors’ Theatre Literary Manager Randy Wyatt, in conjunction with the Living on the Edge committee will read all scripts.  From the initial submission, twelve will be selected for a public reading, to be held in April of 2012. All writers whose work is not selected for public reading will receive written feedback on their work by April 5, 2012.

The reading of the fifteen scripts presented on a Saturday in April (Date/Time TBA) at Spectrum Theater, 160 Fountain Street.  At the public reading playwrights will receive 5 minutes of verbal feedback on their piece. Based on audience response and feedback, the Living on the Edge committee will choose five finalists from the scripts read at the public reading.  These finalists will be presented in full production during June of 2012 in the “black box” performance space (Room 201 – Spectrum Theater Building).

The writers whose scripts are chosen for final production will receive $100. Everyone who submits a script for consideration will receive two complimentary tickets to any show during the Actors’ 2012-13 Season. The theme this year that writers are asked to respond to is “Evil Things”. Be sure to always keep in mind that the five scripts chosen will be performed before an audience. We always encourage writers to create pieces that will be dynamic and engaging when presented by performers on stage. We’re excited to read your submission so choose any direction that is exciting and productive for you as a writer to craft a 10 minute play highlighting an aspect of the chosen theme.

Submit the play by email to script_submissions@atgr.org This e-mail address is being protected from spambots. You need JavaScript enabled to view it and include “LOTE IX” in the subject line.  Submissions will also be accepted via U.S. mail to

on or before March 1, 2012. To be considered, the playwright must currently reside in the state of Michigan, or have resided within the last twelve months.  All submissions must include a cover page that lists your name, address, phone number, email, title of play, total number of actors, and a brief synopsis of the work. Please do not list your name on any page other than your cover so that all plays may be read with anonymity by the committee.  Final production decisions will be based on originality, ability to cast and produce, and the way the plays chosen fit together for an evening of theatre.

Filed under Communication, Living On The Edge, Plays and Productions, Press Release