Ruth Butler Writes About “August: Osage County” in Her Blog 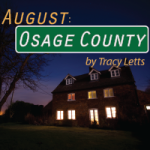 Writer and speaker Ruth Butler was in to see August: Osage County.  She wrote about Actors’ production on her blog.  Here’s an excerpt:

Running through May 26 at Actors’ Theatre in Grand Rapids.

Every family has its problems. Yet after being immersed in those lived by the Weston family of Oklahoma, I wanted more.

Not because “August: Osage County” felt unfinished. But because we, the a

udience, had been through so much with these people, we became invested. We cared.

As the characters grapple with the disappearance of the father, boils burst and ruts are examined. In the capable, rousing hands of some of the area’s best performers, the characters are simply unforgettable.

The play, the final production of the season for the downtown Grand Rapids theater, has quite a pedigree: a Pulitzer Prize and a Tony for its Broadway run.

It opened at Chicago’s storied Steppenwolf Theater before moving to Broadway. Now it’s in GR. Do not miss it.

If you fear the ravages of family drama, know that this three-act play by Tracy Letts has humor even in the most harrowing scenes. Laughter and tragedy? What, you never saw those masks?

And the cast: Dream Team. I’d love to know how many previous productions these players represent. How many total years of experience they bring to the table.

Read the rest of the article on Ruth’s Blog.  Thank you for your kind words, Ruth!

For more information about August: Osage County, including links to purchase tickets, go to Actors’ website at www.atgr.org.