Also opening this weekend: Reckless at AQ Theatre.  From their Facebook page: 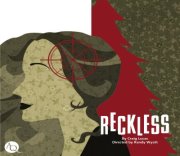 Rachel Fitzsimmons loves Christmas- until she discovers her husband has taken a contract out on her life. Her life quickly becomes a blur of kind strangers, therapists, temporary bosses, game show hosts, strange coincidences and comic ironies. This comedy has a brain and a dark undercurrent that will engage you to the very last moment.