Auditions for “The World of Sholom Aleichem”

Auditions for “The World of Sholom Aleichem”

Auditions will be held Sunday afternoon, March 17th at 2:00 PM and Tuesday night, March 19th, at 7:00 PM on the second floor of Spectrum Theater.

The Cast calls for 11 males/females

The World of Sholom Aleichem is an ensemble piece of three intriguing, touching and sometimes hilarious stories of Jewish culture strung together by a narrator, the Mendele. The cast calls for 11 actors of various age, race, and gender. The play will be cast neutral in all of those categories and actors will be expected to play multiple roles. Women will play men, People in their 50s will play children, race will not be a factor in casting. Except for the narrator, there are no leading or minor roles.

Auditioners are expected to come and bring their ability to play anything in or out of their type. Auditions will consist of cold readings from the script and casting will depend on your ability to match the type of character you are presented. Preference will be given to people who can stretch beyond one single type of play various characters with conviction.

GRAND RAPIDS, MI. Opening March 28th, 2013, Actors’ Theatre is proud to present Jeff Bowen and Hunter Bell’s musical comedy [title of show]. The two main characters – Jeff and Hunter as themselves – have decided to put their script writing skills to the test by submitting their work to a musical theater festival. With the deadline only a few weeks away, though, they have not a single music note written – or any sort of plan!  With a serious case of writers’ block, it seems that Jeff and Hunter will get nowhere with their musical. Enlisting the help of their friends Susan, Heidi and Larry, they come up with their own “original” idea that is sure to be noticed at the festival. A completely hilarious and silly take on the world of theatre, [title of show] is the ultimate definition of a play within a play (within a play). In short, it’s “a musical about two guys writing a musical…about two guys writing a musical.”

The production of [title of show] premiered at the Musical Theatre Festival in 2004, from which later ran several off-Broadway performances at the Vineyard Theatre in 2006, as well as Lyceum Theatre on Broadway in 2008. Notably, director Michael Berresse and co-writers and actors Bowen and Bell won Obie Awards, as well as Bell was nominated for Best Book of a Musical in the Tony Awards. In its premiere production, the Chicago Tribune gave its review by describing [title of show] as “warm, smart, wry, creative, [and] melodic.”[1]

Jolene Frankey (The Sweetest Swing in Baseball, 2011), Ellie Frances (Next Fall, 2012), and Michael Shansky. Director Michelle Urbane had this to say about the opportunity to direct [title of show]:

“A few reviews compared [title of show] to Seinfeld, saying if television can have a big hit show about nothing, why can’t musical theatre? We are playing with the humorous, fun, flirty, delectable nature of the show – and we’re having a great time with it!

I am so thrilled to be directing this show, and the cast will be an absolute draw. It’s going to be a night of fun, comedic theatre. If you like musical theatre, you’ll definitely love this show. And if you don’t – you’ll still love it!”

The production of [title of show] will be presented for two consecutive weekends at GRCC Spectrum Theatre, 160 Fountain Street NE, Grand Rapids. The production opens March 28th, 2013 and closes on April 6th, 2013. All evening performances will begin at 8:00pm.

Ticket prices begin at $24 for adults and $20 for students/seniors. Students with a valid ID are eligible for $10 RUSH seating, based on availability and beginning one hour before the performance. Groups of ten or more are eligible for discounts. Tickets for [title of show] may be purchased online at http://atgr.org/title-of-show or by contacting the Actors’ Theatre box office at (616) 234-3946.

Meet the Cast of [title of show]

Ellie was most recently seen on the Actors’ Stage in Next Fall. Her past Actors’ credits include: The Sweetest Swing in Baseball,Distracted, Mr. Marmalade, A New Brain and Side Show. Her Circle Theatre credits include: Hair, Rumors, Aint’ Misbehavin’,RENT, Annie, TOMMY, Oliver! (Lead Actress Grand Award winner) and Moby Dick! as well as performing with Civic Theatre in The Producer’s. In addition to her theatrical performances Ellie can be seen regularly as a vocalist at The SpeakEZ Lounge.

Jolene is thrilled to be back on the Actors’ Theatre stage after most recently being seen as Dana in 2011’s The Sweetest Swing in Baseball, as she is also currently starring in the sold-out and infinitely-running “Overworked Mom.” The latter show boasts a myriad of award-winning supporting characters including Mike Frankey as The Dutiful Husband, Kathy Huffman as The Doting Nana, and Hudson Michael as The Center of the Universe. Jolene also moonlights as a Casting Director, an acting teacher, and the lone lady in the local band Sex Coffee. She has worked in front of/behind the curtain/camera in NYC/Grand Rapids/Pittsburgh/Paris/Chicago/[insert city here].

Rob is thrilled to finally get to do this show after he and Ellie have been following it since they were in Side Show together.  He has performed at a few places around town, including Circle, Civic, Jewish, Heritage, Aquinas College, Mason Street Warehouse and Opera Grand Rapids.  He won Grand Awards for wearing a dress and blonde wig in both Forbidden Broadway and A Funny Thing Happened on the Way to the Forum.  He lost a Grand Award to his more talented partner, Dylan, for Mr. Marmalade (should have worn the wig).  He will also admit to being in the following shows: Moby Dick!, The Full Monty, Assassins, Sunday…George, The 25th…Spelling Bee, Honk!,  and Next Fall.  He most recently finished directing Based on a Totally True Story for GRCC Players and will begin rehearsals soon for The Marvelous Wonderettes: Caps and Gowns at Circle Theatre.

Michael has music directed many shows for Grand Rapids’ theatres in the past 23 years, as well as composed incidental music for over 40 productions and a full length dance for the West Bank Dance Ensemble.  His music directing credits for Actors’ Theatre include (but are not limited to) Floyd Collins, Urinetown, A New Brain, Assassins, A Man of No Importance, Kiss of the Spiderwoman, and Tick Tick Boom just to name a few!  In 2010, he gave a solo piano concert as part of the Ferris Festival of the Arts, including classical, jazz and Gershwin’s American in Paris.

George was most recently seen in the 2011 Actors’ production ofSpring Awakening and at Circle Theatre in last summer’s production of Hair. George has also appeared at Mason Street Warehouse as Mary Sunshine in Chicago. A few others of George’s favorite roles he has played include Candide inCandide, The Mysterious Man in Into the Woods, Joseph inJoseph and the Amazing Technicolor Dreamcoat, Troy Bolton inHigh School Musical, Lt. Joseph Cable in South Pacific, and Schroeder in You’re A Good Man Charlie Brown. George is a recent graduate of Grand Valley State University where he studied vocal perfromance under Dr. Kathryn Stieler.

[title of show] opens at Actors’ Theatre on March 28th. Get more information and order your tickets at www.actorstheatregrandrapids.org 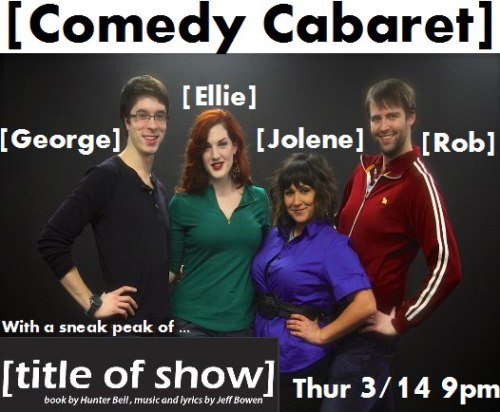 Thursday, March 14, 2013, 9:00PM:  In honor of Laughfest SpeakEZ Lounge will be hosting a Comedy Cabaret with 4 VERY familiar faces from SpeakEZ stage!

Come and enjoy some hilarious songs, some unexpected “Gender Bending” rock anthems and all around hilarity with Ellie Frances, Jolene Frankey, Rob Karel and George Toles all of which will be accompanied by the fantastic Scott Patrick Bell.

In addition to this 90 minute comedic cabaret you will get to experience a Sneak Peak of the Actors’ Theatre Musical [title of show]! The cast will be performing a few select numbers to start off the night. [title of show] is slated to go on stage next month at Actors’ starring George, Rob, Jolene and Ellie with one Mr. Michael Shansky at the keys all under the direction of Shelly Urbane.

This evening will be full of laughs, drinks.. laughs and oh, more drinks!
We will also have donations buckets available so you can show some love to Actors’ Theatre!

So come, support local theatre, local talent and well… your sense of humor!

This event will not have a cover.

2013 marks the tenth installment of the Actors’ Theatre annual 10 minute play festival, Living on the Edge.  We cordially extend an invitation to interested Michigan writers to submit a script for consideration. The deadline to submit your 10 minute script has been extended for one week to March 7th.

For more information submitting your work for Living on the Edge: Superstition, go to www.atgr.org