This weekend Actors’ Theatre auditions for:

Synopsis: In Duchess County, New York eight friends gather over the course of three summer weekends in a house belonging to aging Broadway choreographer Gregory and his younger partner Bobby, who is blind. The guests gather, some possibly for the last time, as friendship, love, life and death take center stage in the award-winning contemporary classic. [Read More]

Auditions start at 12 (noon) and will run no longer than 3pm. Those wanting to audition should arrive no later than 1:30 the day of auditions. If you cannot make it to auditions between Noon and 1:30 or are unable to make auditions completely but are still interested in auditioning, please contact Chris at the Actors’ Theatre Office (616 234-3968) to make arrangements to be seen on a different day or at a different time.

Scripts are Available 1 month prior to Auditions and can be checked out with a $10.00 deposit. Contact Chris at 234-3968 to make arrangements to check out a script (best times are M-F 10am-3pm).
*All Scripts must be returned by and cannot be checked out the week of auditions.

As part of its mission of inclusion and in order to receive benefit from the rich diversity of our community, Actors’ Theatre Grand Rapids is committed to casting all productions without bias towards race, gender, sexual orientation, or religion. Except when necessary to the intent or message of the work, Actors’ Theatre and its artistic staff will cast productions, for all roles, without regard for race and, whenever possible, gender.

“Beauty Queen of Leenane” Closes to Sold Out Houses!

Production still from “The Beauty Queen of Leenane” written by Martin McDonagh.

Actors’ Theatre would like to thank everyone who came out and saw our first Second Space production at Dog Story Theatre, “The Beauty Queen of Leenane.” The production was a great success and closed with Sold Out shows. We are grateful for all the positive comments, like these from our Facebook page:

From Deb C.: This show is a must see. The performances are across the board spot on. As always, with Fred Sebulske at the helm of such a talented & experienced cast, the whole production is at the highest level. And Dog Story Theater harks back to the original days of Actors’ in the old church. Very grateful to all involved for bringing this uber dark story to frighteningly real life on stage. Major kudos to everyone!

From Ginny K: This is a marvelous production!!! Bravo to Fred Sebulske and the superb cast. Wish I could see it a second time…

From Kathy B: Incredible show! An absolute “Must See”! Amy, Rose Anne, Craig and Dylan provide the most amazing acting you will ever see, even in this town of many incredible actors…. Thank you, Fred and Actors’ Theatre for a thrilling evening.
From Mary Beth Q: Congratulations to Actors’ on a great production and a great inaugural run at the Dog Story Theater!

Tonight’s Production of “Beauty Queen of Leenane” is SOLD OUT

We are pleased to announce that Friday night’s production of Beauty Queen of Leenane is SOLD OUT!

There are few more seats available for Saturday and Sunday’s performances. If you are interested in seeing this amazing, much talked about production, we recommend you reserve your tickets online immediately. Go to http://actorstheatregrandrapids.org/beauty-queen-of-leenane to reserve tickets.

Remember, this production is being hosted by Dog Story Theatre, so there are a smaller number of seats available than at our usual home of Spectrum Theatre. Ordering in advance is highly recommended.

See what others are saying about Beauty Queen of Leenane:

The Beauty Queen of Leenane receives three and a half stars out of four in the review on mlive.com

Sue Merrell also wrote a personal piece on her blog, Laughing for a Living: Grand Canyon of Leenane 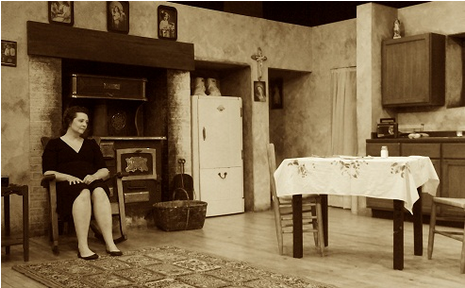 “The Beauty Queen of Leenane” Opens This Week!

Check out this great article on our new Second Space series on mlive.com! Our first show of the season opens July 18th, so be sure and pick up your tickets at the Actors’ Theatre website. 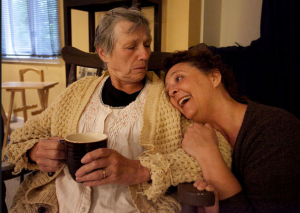 Actors’ Theatre, which has offered a September to May season for 32 years, is venturing out for something new this summer, offering two shows in the contemporary black box space of Dog Story Theater. The first, “The Beauty Queen of Leenane,” opens Thursday, July 18, for nine performances. The second, “ Circle Mirror Transformation,” runs Aug. 22-Sept. 1.

“We always have some plays that don’t fit into the season,” said Chris Carnevale, director of operations. “These are shows we wanted to share with the community. And it is a way for people to enjoy Actors in the summer as well.”

Actors’ Theatre is built upon a partnership with Grand Rapids Community College and has always performed in the college’s Spectrum Theater. During the summers, however, Spectrum’s main stage is being used by Heritage Theatre Group and Jewish Theatre Grand Rapids. The theater has a black box space in an upstairs classroom, but it accommodates about half the audience of the 70-seat Dog Story space.

“This is another way to reach out to new audiences and to spotlight a new venue for our patrons,” Carnevale said. “We love our home at Spectrum but we like to work with all the theaters in the community.”

“It’s a different space with the audience on two sides,” said Fred Sebulske, who is directing “The Beauty Queen of Leenane.” “It takes me back to my early days in the old Circle Theatre.”

Sebulske said he has wanted to direct this dark Irish comedy for more than a decade but it never quite fit into the main stage schedule at Actors’ Theatre.

Read the rest of the article, including information on our other Second Space series production, Circle Mirror Transformation  on www.mlive.com. Tickets, show times and other information can be found at the Actors’ Theatre website: www.atgr.org

We’re back in 1958, and it’s time for The Marvelous Wonderettes to graduate in this long-awaited sequel to the smash Off-Broadway hit! Join Betty Jean, Cindy Lou, Missy, and Suzy as they sing about their final year in high school, celebrate with their fellow classmates and teachers, and prepare for their next step toward a bright future. Act Two zooms ahead to 1968, where the girls perform as bride and bridesmaids to celebrate Missy’s marriage to Mr. Lee! Featuring “Rock Around the Clock,” “At the Hop,” “Dancing in the Street,” “River Deep, Mountain High,” and 25 more hits, The Marvelous Wonderettes: Caps & Gowns will have you cheering for more!

From the playwrights: “All 37 Plays in 97 Minutes! Now revised for 2013 with the same recycled jokes – just put in a different order. An irreverent, fast-paced romp through the Bard’s plays, The Complete Works of William Shakespeare (abridged) was London’s longest-running comedy having clocked a very palpable nine years in London’s West End at the Criterion Theatre! Join these madcap men in tights as they weave their wicked way through all of Shakespeare’s Comedies, Histories and Tragedies in one wild ride that will leave you breathless and helpless with laughter.”

Go to the Heritage Theatre Group website to learn more and order tickets.

The Beauty Queen Of Leenane

Maureen Folan is plain.  Maureen Folan is lonely.  Maureen Folan’s sisters have moved on to marriage and children while she remains as the caretaker for her manipulative, aging, and harshly critical mother Mag.  When Mag interferes with Maureen’s first and possibly final chance for a love of her own, their already awful relationship takes an even sharper turn for the worse.

Equal parts hilarious, chilling and tragic, The Beauty Queen of Leenane is a dark Irish comedy by one of the masters of the genre.  Author of The Lieutenant of Inishmore, A Skull in Connemara and The Pillowman, among others, Part One of McDonagh’s “Leenane Trilogy” is the Tony Award-winning play that will have you leaving the theatre aghast and abuzz.

Go to the Actors’ Theatre website to learn more and order your tickets.