“Venus in Fur” in On The Town

There is great article about Venus in Fur by On The Town’s Katerie Prior up on mlive.com. Here is an excerpt:

[…] Set in present day, Thomas Novachek is a young playwright who has adapted von Sacher-Masoch’s novel into a play. Unfortunately, it’s the end of the audition and no actress has captured Thomas’ interest until Vanda Jordan shows up. Goofy, nosy, persistent, but utterly charming, Vanda wheedles Thomas to go through some of the scenes with her. But as the audition progresses, who is really in charge of the audition begins to blur. Who exactly is Vanda? How did she get a copy of Thomas’s script? And is Thomas directing Vanda or is it the other way around?

Critically acclaimed when it opened Off-Broadway in 2010, Venus in Fur is a dark comedy that shifts between humor and seriousness. Fortunately, that isn’t too hard for Director Michelle Urbane to handle—she’s directed Mr. Marmalade and Steel Magnolias in the past. “This is really about relationships,” she said. “The power struggle that occurs between actor and director, or man and woman. How far are these characters are willing to go?”

Venus in Fur may seem like an odd choice for theater around the holiday season, but Urbane thinks that this is perfect for adults looking for a theater experience that doesn’t include sugar plum fairies. “This is something fun that doesn’t have to be family-oriented,” she said. “I want audiences to walk away and say, ‘Wow, that was fun. Do you think everything happened?’ But I can’t say more than that.” […]

Want more? Click on over to On the Town on mlive and read the rest of the article, then go to www.atgr.org and reserve your tickets. There are just 6 performances of Venus in Fur which opens tomorrow night! 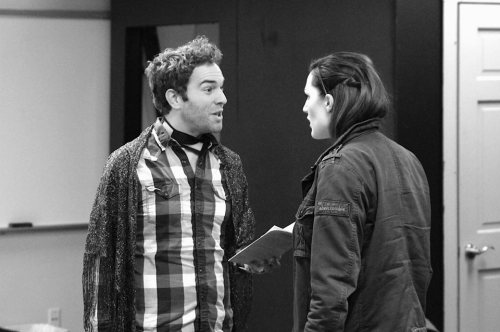 Rehearsals with Elinor Frances as Vanda and Kye Los as Thomas in “Venus in Fur.” Photo credit: Dave Kagan