There is Still Time to Catch “The Boatwright” at GRCT!

The Boatwright, a World Premier, is showing through September 28th at Grand Rapids Civic Theatre. See their Facebook page for links to great articles about the production and to GRCT’s website to reserve your tickets.

Click on the logo to visit Circle Theatre’s website and learn more about their current production and upcoming shows:

After suffering a major loss while on a cross-country bike trip, 21 year-old Leo seeks solace from his feisty 91 year-old grandmother Vera in her West Village apartment. Over the course of a single month, these unlikely roommates infuriate, bewilder, and ultimately reach each other.

Reserve your tickets at www.atgr.org! 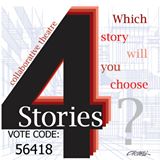 Actors’ Theatre in conjunction with a group of artists based out of Actors’ Theatre, in collaboration with the UICA, has an interactive performance piece in ArtPrize this year!

This group of artists are creating a full theatrical piece of theater during ArtPrize with the interaction, collaboration and inclusion of the community and the other pieces displayed in the UICA.

The “team” of artists are all professionals in the field in multiple ways and have all worked with Actors’ Theatre which is what has brought them together for this particular piece.

“Four Stories” is a show that is following 4 different storylines that will eventually be performed on all four stories of the UICA at different times. These stories are unique in that they stand alone and also interact with each other.

As part of ArtPrize, the “team” is writing this show and creating all the elements to support the show during ArtPrize with voters input and ideas, giving the people a look behind the scenes on what all goes into this form of art and also giving them some ownership of the show as it evolves. Everything from script, to costumes, set, music and acting/directing will be on display as part of the art-piece and the voters will get a taste of it all.

The logistics of the show will go as follows:

For the first part of ArtPrize the “team” will be in the space (mostly the Pottery Studio) writing, fitting costumes, building a set and rehearsing with the input of the audience both present and on social media.

The last part of ArtPrize (Oct 2,3 & 4) the “team” is hoping to have a complete show to then perform for the last weekend. This way the audience can see what they helped create.

We will have a more solid “Performance” schedule to you soon. Stay tuned for more details!

You can stay updated by liking the Four Stories Facebook page as well!

Come on down to the UICA (corner of Division and Fulton) during ArtPrize and vote for Four Stories – vote code 56418!

Did you see the wonderful collection of rehearsal photos for 4000 Miles we just recently posted in our Facebook album? Click the photo below to see more! Photo credit: Dave Kagan, Sensitography, Grand Rapids. 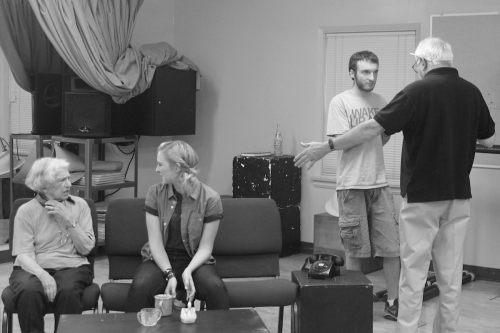