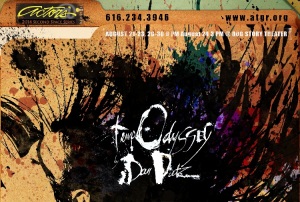 “It wasn’t me. It was the black hole.” With these words, a temp worker named Genny launches us on an epic, fantastical journey through corporate America, Appalachia, astrophysics and beyond. TEMPODYSSEY tells the story of a young woman who’s convinced she’s the goddess of death. Fleeing the imminent creation of a black hole on one side of the country, she lands smack in the middle of a bomb manufacturing company on the other. Her only hope lies in the unlikely guise of a nameless temp who considers himself immortal. Can he help Genny cast off her dark mythology once and for all? Or will she explode, taking all of downtown Seattle with her? Dan Dietz melds the absurdity of contemporary cubicle life with the epic poetics of Greek mythology, and the results are hilarious, horrifying and ultimately uplifting.

Filed under Events, Plays and Productions

Living on The Edge Opens Tonight! 5 Plays by Michigan Playwrights

The following five plays, all written by Michigan playwrights, have been selected for performance June 19- 21, 2014 at 8PM in the GRCC Spectrum Theater Black Box (Room 201):

“Running Away” by G.M. Bud Thompson

Sometimes, when life becomes too much to handle, we think about running away. Sometimes we even try and if we are really lucky, someone tries to stop us. A “role reversal” drama with humor. Inspired by actual events.

“Another Man’s Shoes” by Brad Sytsma

When Dennis, a middle aged family man in the midst of a midlife crisis, finds himself waking from an unexpected nap on a park bench to a stranger strolling about in his shoes, he doesn’t realize that his world is about to get turned upside down. What do you do when an outrageous thief who doesn’t want to steal anything, and seems to know everything about you, offers you life advice while wearing your shoes?

A woman who thinks that cosmetic surgery is the answer to her problems must decide how far she is willing to go in her quest for youth.

A family haunted by the loss of one son, Zak, to a hunting accident, deals with a father’s rejection of his only remaining child, Hank, and a mother’s fight to keep her son close to home.

This play looks at the zombie phenomenon from the zombie’s point of view; delving into the idea that there are more than one type of zombie, and that they may not be all that happy to actually be zombies. See the trials and tribulations and the desperate moves it actually takes to be a successful zombie!

Tickets will be sold at the door but seating is limited so get your tickets in advance.

Filed under Living On The Edge, Plays and Productions

Check out this review by Cassandra Sandros from BroadwayWorld.com:

BWW Reviews: From Everything to Nothing: GREY GARDENS the Musical (Actors’ Theatre)

The offbeat and somewhat perplexing musical Grey Gardensacts as a pseudo-documentary of the rise and fall of the reclusive mother/daughter duo of “Big” Edith Bouvier Beale and “Little” Edith Bouvier Beale. Aunt and cousin, respectively, of Jacqueline Kennedy Onassis, the story follows their lives from high society to abject poverty, living in a decomposing mansion overrun with flea-infested cats.

Grey Gardens the Musical is based upon the 1976 documentary of the same name, by Albert and David Maysles. Footage from this documentary is played as a prologue, accompanied, ironically, by the song ‘The Girl Who Has Everything’.

This introduction transitions into the luxurious Grey Gardens mansion of 1941 on the eve of Little Edie’s engagement party, wherein the play takes on the camp qualities of other pre-World War II musicals. This portion of the show is the product of fantasy, as the writers imagined what it would have been like for the family at the peak of their fame. The songs are upbeat and Porter-esque and the Bouvier family is at the height of its influence and grandeur. Big Edie (Kathy Gibson) is portrayed as a self-involved socialite whose time is spent preparing musical works with her charming, ivory-tickling “soulmate”, George Gould Strong (Neil Trevisan), while Little Edie (Allyson Paris) longs for the freedom to pursue her own dreams of stage and screen. After expressing her sincere desire to have things remain the same and not to lose her daughter, Big Edie sabotages her daughter’s engagement to the White House-seeking Joe Kennedy and Act One draws to its conclusion as Little Edie makes her escape to New York City, leaving Big Edie to entertain the party guests (the audience) with the heart-breaking “Will You”.

[Click over and read the rest of the review on www.BroadwayWorld.com]

Grey Gardens received 3.5 out of 4 stars from mlive.com. If you did not get a chance to see the review, check out the excerpt below – then head to www.mlive.com to read the full article.

Fame and fortune are fleeting, but not as fragile as sanity.

“Grey Gardens,” the final show of the season at Actors’ Theatre, is an ominous tribute to our values, blurring the barriers between fantasy and reality, dependence and independence, beauty and ugliness. And it’s all based on a true story.

“Grey Gardens” pulls back the curtain on some of the more notorious relatives of First Lady Jackie Kennedy Onassis, including her aunt Edith Bouvier Beale, known as Big Edie, and Big Edie’s daughter of the same name, known as Little Edie.

The opening act depicts the ladies and their East Hampton mansion during its heyday in 1941. Little Edie is about to announce her engagement to Joseph Patrick Kennedy. She is the girl who’s got everything. And Big Edie is eager to use the social occasion to show off her operatic skill.

Tickets are on sale now! Go to www.atgr.org to reserve yours today!

Opening night was sold out! Get your tickets now at atgr.org.