Andrew Kuhn from mlive got some great photos from dress rehearsal of Bloody Bloody Andrew Jackson. Click on the photo below to see them all!

What’s a better Valentine’s Day date than a night at the theatre? How about some hot rock and roll with Bloody Bloody Andrew Jackson?!

Want a sneak peek? Check out our youtube video!

Tickets and additional show information can be found at www.atgr.org

Why does Noddea look so fierce?

What is Benjy thinking about?

What makes Jason so excited? 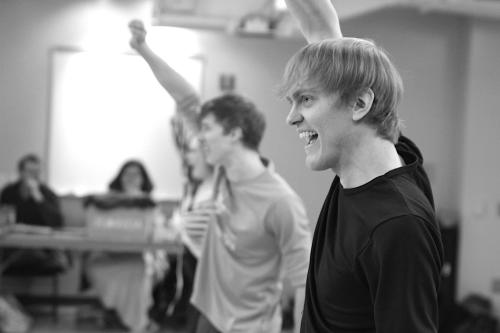 Get your tickets today!

A big thanks goes to Dave Kagan of Sensitography for the rehearsal photos. To see more, check out our Facebook photo album!

Just in case you missed it – there was a great article about Bloody Bloody Andrew Jackson recently on mlive. Read the full article on their site and click the photo below to see more rehearsal photos from this fantastic new musical!

By Todd Chance | tchance@mlive.com
GRAND RAPIDS, MI – If you look closely at President Andrew Jackson’s image on a $20 bill, you might be able to see a small smirk. But you’d be hard pressed to imagine him rocking out as the lead singer of an emo-rock band.

Grand Award-winning director Kyle Amanda Dutkiewicz (“The Wild Party”) is at the helm of this 11-person cast and takes on choreography duties as well. Scott Bell is the music director.

“The notes on the script say it is to be played like a PBS special or ‘Saturday Night Live’ skit,” Dutkiewicz said in a phone interview. “But I’d add in the popular ‘Drunk History’ videos from YouTube as inspiration as well.”

Read the rest of the article here, then head over to www.atgr.org to order your tickets today!

Did you see? Dave Kagan from Sensitography took some amazing photos from Bloody Bloody Andrew Jackson! You can see some on Facebook in the Actors’ Theatre album, and even more on his website!

For more information on the show and to order your tickets online, go to www.atgr.org today!