Actors’ Theatre is very proud to be a part of the World AIDS Day event being held at Fountain Street Church, presented by the Red Project, on Monday, December 1st at 7pm.

Actors’ family members, Ellie Frances, Jolene Frankey, Gary Gramer, Jane DeYoung, Rob Karel, Dylan Harris, Jennifer Jelsema and Todd Wilki, will be performing a few brief scenes from The Normal Heart and The Destiny of Me – both written by Larry Kramer and singing some great musical pieces such as: Hear My Song (Songs for a New World), No One Is Alone (Into The Woods) and True Colors (Cyndi Lauper).

We hope you can make it!

Announcing our 2015 Living On The Edge XII Theme

2015 marks the twelfth installment of the Actors’ Theatre annual 10 minute play festival, Living on the Edge. We cordially extend an invitation to interested Michigan writers to submit a script for consideration.

The deadline for scripts will be March 13, 2015. Actors’ Living on the Edge committee will read all scripts. From the initial submission, ten semi-finalists will be selected for a public reading, to be held in April of 2015. All writers whose work is not selected for public reading will receive written feedback on their work by May 4th, 2015.

The reading of the fifteen scripts presented on a Saturday in April (Date/Time TBA) at Spectrum Theater, 160 Fountain Street. At the public reading playwrights will receive verbal and written feedback on their piece. Based on audience response and feedback, the Living on the Edge committee will choose five finalists from the scripts read at the public reading. These finalists will receive full production from June 4-6, 2015 in the “black box” performance space (Room 201 – Spectrum Theater Building).

The writers whose scripts are chosen for final production will receive $100.

The theme this year that writers are asked to respond to is
“Should Have Said”.

We encourage playwrights to consider the following as they craft their submission:

· The five scripts chosen will be performed before an audience. We always encourage writers to create pieces that will be dynamic and engaging when presented by performers on stage.

· Craft a 10 minute play highlighting an aspect of the chosen theme. It can tie in broadly or very specifically, but relevance to the theme is a key consideration in selection.

Submit your play, including a brief synopsis, by email to: script_submissions@atgr.org and include “LOTE XII” in the subject line. Submissions will also be accepted via U.S. mail to

To be considered, the playwright must currently reside in the state of Michigan, or have resided within the last twelve months. All submissions must include a cover page that lists your name, address, phone number, email, title of play, total number of actors, and a brief synopsis of the work. Please do not list your name on any page other than your cover page so that all plays may be read with anonymity by the committee. Final production decisions will be based on originality, ability to cast and produce, and the way the plays chosen fit together for an evening of theatre.

Filed under Living On The Edge, Plays and Productions

Auditions for “Water by the Spoonful” this Weekend!

Auditions for Water by the Spoonful by Quiara Alegra Hudes, will be Saturday & Sunday November 22nd and 23rd from Noon – 3pm both days. Individuals auditioning need to register by 1pm to audition.
Director, Michelle Urbane, is excited about the opportunity for a diverse cast for this production: Hispanic/Latino, Asian American, African American, and Caucasian

Rehearsals Begin: December 1st, 2015 (* There is a period fromDecember 22nd–January 4th that there will be no rehearsals.)

Synopsis:
Elliot, an Iraq war veteran, joins an internet chatroom in an effort to deal with the after-effects of war. An intimate portrait of both a family and the members of an online recovery community is unlocked as they struggle with the harrowing consequences of addiction. Covering the distance between the virtual world to the physical, Water by the Spoonful ties together the lives of a host of unforgettable characters in a play of genuine warmth about forgiveness and redemption.

Visit our www.atgr.org for more information!

Today is the General Election and your vote matters. There is still time to make a difference. Need more information on voting? Check out the AccessKent website. 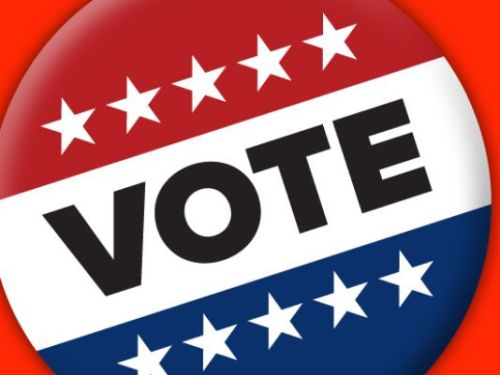 Celebrate 100 Years of GRCC As They Present “Open Door”! 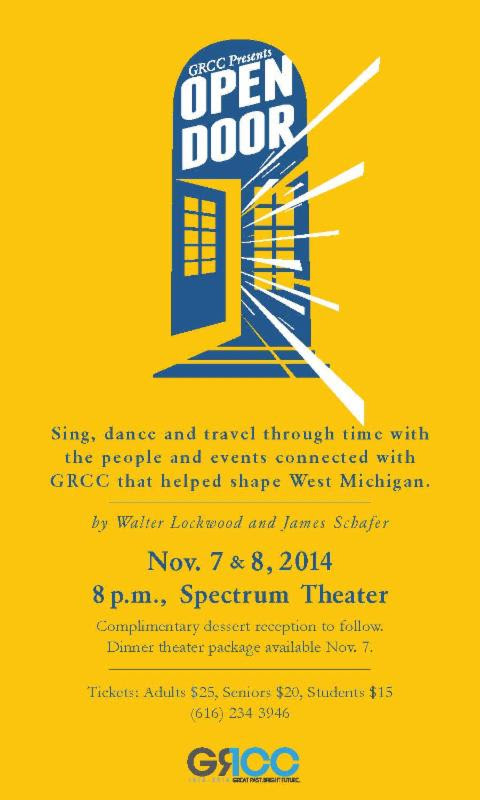 Take a journey through time (1914-2014) and celebrate 100 years of GRCC’s existence and impact on our community!
Click here to reserve your tickets online!

Filed under Around Town, Communication, Donations and Support, Events