Actors’ Theatre would like to send a big congratulations to Preston Mulligan, Patrick Nowak and Meeka Postman, all recent winners of theatre scholarships! Take a moment to read more about the scholarships and these amazing local performers in this article from mlive:

Rising local actors awarded $6,000 in scholarships at Festival of the Arts 2014

GRAND RAPIDS, MI – Three scholarships worth $6,000 for young actors were among the awards presented during Festival of the Arts 2014.

Winners of the Combined Theatre Scholarships for budding thespians in the Grand Rapids area are Preston Mulligan, Patrick Nowak and Meeka Postman.

One of the three awards, formerly known as the Grand Award Scholarship, was renamed the Paul Dreher Scholarship in honor of the former managing director of Grand Rapids Civic Theatre who died in June 2013.

[Read more about the recipients in the full article…]

Filed under Communication, In The News

Grey Gardens received 3.5 out of 4 stars from mlive.com. If you did not get a chance to see the review, check out the excerpt below – then head to www.mlive.com to read the full article.

Fame and fortune are fleeting, but not as fragile as sanity.

“Grey Gardens,” the final show of the season at Actors’ Theatre, is an ominous tribute to our values, blurring the barriers between fantasy and reality, dependence and independence, beauty and ugliness. And it’s all based on a true story.

“Grey Gardens” pulls back the curtain on some of the more notorious relatives of First Lady Jackie Kennedy Onassis, including her aunt Edith Bouvier Beale, known as Big Edie, and Big Edie’s daughter of the same name, known as Little Edie.

The opening act depicts the ladies and their East Hampton mansion during its heyday in 1941. Little Edie is about to announce her engagement to Joseph Patrick Kennedy. She is the girl who’s got everything. And Big Edie is eager to use the social occasion to show off her operatic skill.

Tickets are on sale now! Go to www.atgr.org to reserve yours today!

Grand Rapids Civic Theatre and Circle Theatre in the News

Two great articles on local productions were published recently. We’ve posted exerts below, but be sure and click the links to read the full articles:

The Inside Dish on Civic Theatre’s Nine to Five: The Musical 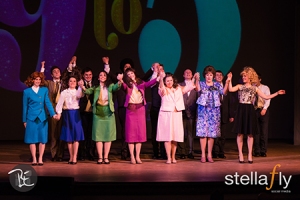 The cast of 9 to 5, the musical at Grand Rapids Civic Theatre. Photo credit: Byan Esler of stellafly

When 9 to 5 hit the movie theaters in 1980, I hadn’t seen anything like it. I was a teenager, and I went to see it in a West Michigan suburban movie theater with my middle-aged Canadian mother.

We both laughed ourselves silly throughout the entire film — and we weren’t alone. Everyone else in the movie roared at this now classic movie about three working women (played by Lily Tomlin, Dolly Parton, and Jane Fonda) who take their revenge on their “…sexist, egotistical, lying, hypocritical bigot” of a boss (played by Dabney Coleman).

If you haven’t seen 9 to 5, go see it for the laughs. Nine to Five: The Musical will be playing at the Grand Rapids Civic Theatre from May 30 to June 15. Even if you’ve seen it at the movies or on TV, go anyway; because this very funny story is now a full-blown live musical with new lyrics and music by the phenomenal Dolly Parton.

Read the full article on stellafly… 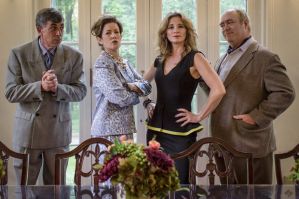 GRAND RAPIDS, MI – Next up on the Circle Theatre stage is a foreign affair (with an emphasis on the affair) as “Don’t Dress for Dinner” – the sequel to the hilarious French farce “Boeing, Boeing” produced last year at the local theater – debuts on Thursday, June 5.
Once again the plot revolves around the philandering Bernard who has plans to rendezvous with yet another mistress. As those plans go awry, his best friend Robert, wife Jacqueline, and a couple of women named “Suzy” are caught up in the marital mess where finding an innocent isn’t as easy as it seems.

Did you see Sue Merrell’s review for God of Carnage? Here is a quick excerpt: 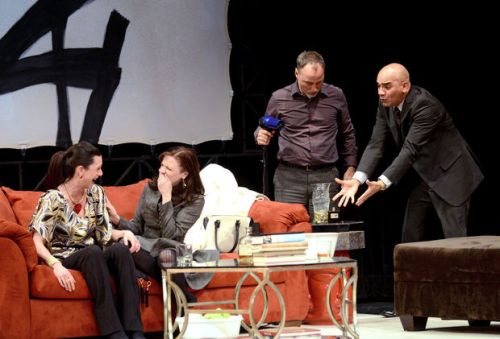 From left actors Carrie McNulty, Amy McFadden, Craig Hammerlind and Sammy A. Publes perform during a dress rehearsal of ‘God of Carnage’ at the Actors’ Theatre in downtown Grand Rapids on Wednesday, April 16, 2014. The performance opens April 17 and goes through April 26. (Emily Rose Bennett | MLive.com)

“God of Carnage,” which opened Thursday, April 17, at Actors’ Theatre, is a pithy little play that quickly strips away any sham of civility and exposes humanity’s baser instincts. But it is done so artfully, with such witty retorts and physical humor, that you don’t know what hit you.  […]

Head on over to mlive to read the complete review. If you have already seen the show – leave a comment on the article and let them know what you thought!

There is one more weekend left to see this fantastic show! Tickets can be purchased on the Actors’ Theatre website at atgr.org. Performances are April 24-26 at 8PM

Andrew Kuhn from mlive got some great photos from dress rehearsal of Bloody Bloody Andrew Jackson. Click on the photo below to see them all! 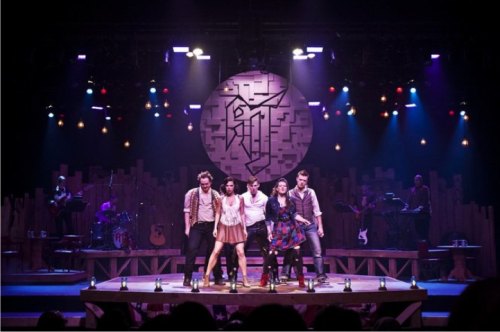