Did you see these photographs of Nadia by Eryn Kovach from Moments in Life Photography?  There are more on the Actors’ Theatre Facebook page!

Want more? Head on over to www.atgr.org to read about the production, the cast and order tickets!

Tickets can be purchased at www.atgr.org

Check out this gallery of photos from Katy Batdorff of MLive.  (Click the photo below to be taken to the gallery on MLive.)

More information and tickets for Nadia can be found on the Actors’ Theatre website.

Three and Half Stars – The Grand Rapids Press Reviews “Nadia”

There is just one weekend left to catch Nadia – the first show of the season for Actors’ Theatre. Have you seen the review in The Grand Rapids Press?  Here is an excerpt: 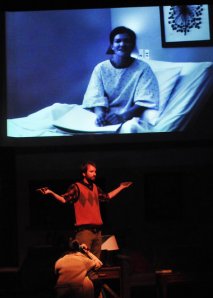 The cast of ‘Nadia’ perform during their dress rehersal at Spectrum Theater Wednesday evening. The play is an Actors’ Theatre production. (Photo credit: Katy Batdorff | MLive.com)

Length: Two hours (with one intermission)

GRAND RAPIDS, MI – “Nadia” is the kind of play that will have people talking because they just can’t help themselves.

The multi-media show, which had its world premier Thursday at Actors’ Theatre, has an intimate, reality-television feel, but explores topics even television avoids such as who has sexual power and what controls arousal.

Written by David Turkel, a playwright and graduate student at the University of Texas at Austin, “Nadia” was selected to open the season after a reading last spring in the Actors’ Pipeline Series. Directed by Stephanie Sandberg, it’s the story of a controversial Russian artist and an American couple who get swept up in her unusual approach to art.

As the story unfolds, we learn that the artist, Nadia (Rena Dam), was sold into the international sex trade as a teenager. Her art exposes the horrors she’s witnessed and is considered pornographic by some. One of the paintings, which are not seen by the audience, is described as a scene of a child and an older man in a sexual encounter.

Steve (Sean Dailey) says the painting depicts a crime and he is hesitant to get involved with this artist, but his girlfriend Kristen (Lizzy Sulkowski) is intrigued by the artist’s ability to give the scene the beauty of a renaissance painting.

To read the rest of the review head over to www.mlive.com, then click over to www.atgr.org to order tickets. Nadia runs from Oct 4 – Oct. 6th.

For tickets and more information, check out the Actors’ Theatre website.

G-SYNC Takes a Look at “Nadia” in Rapid Growth Media

Check out this amazing article about Actors’ first show of the 2012-2013 Season:

As I read the script for the stage debut of Nadia, I had to keep stopping to ask myself how they would stage David Turkel’s newest theatrical drama at Actors’ Theatre, the home of the play’s world premiere.

But if I have learned anything over the years when it comes to productions at Actors’ Theatre, it is best to trust that they will deliver a fantastic debut, just as they did last year with Rust by Austin Bunn at the start of their 2011-2012 season.

And while on the topic of breathing, I have no doubt that the audience members will, at times, have to remind themselves to breathe during this erotically charged play that seeks to look at the delicate lines that divides art, pornography and war. It reminds me that artists are sometimes the best catalyst in our society to help us navigate the bumpy terrain of society.

Nadia is the story of a Russian artist by the same name who either has ignited the imaginations of the art world in rapture, or fanned the flames of condemnation from a hypocritical public. Nadia as an artist presents to others on stage her frank and disturbingly rich taboo imagery and the methods she employs to their creation.

There are moments in this new work by Turkel where remembering to breathe are at the subtle center of the story. This is theatre at its very best.

Nadia’s leap from the page to the stage is also a challenge in that the use of a live video feed is woven into the story. It is sure to enthrall those imaginations of all theatergoers as this creative device takes a leading role in a stellar cast made up of veterans and first-time actors.

Actors’ Theatre receives about 150-200 full-length new stage works each year and if they survive the workshop or reading phase (which includes for many a public debut through a reading like those held at UICA this last Spring), we have the opportunity as a community to see groundbreaking new works likeNadia nurtured and produced on Actors’ stage.

“Nadia appeared last fall when David (Turkel) gave a copy [of the play] to our literary manager, Randy Wyatt,” says Actor’s Director of Development and Marketing Jonathon Clausen, who is also acting in this work. “It is the kind of play that will appeal to those seeking a contemporary theatrical experience, as well as those who prefer dramatic literature from great American playwrights like Tennessee Williams, Sam Shepard or David Mamet.”

Clausen’s assessment is pretty spot-on, as one having read works by these American playwrights. Nadiaand works like this that seek to engage in the difficult conversations of life illustrate why theatre is not only alive on the stage, but how when we embrace the unknown, it will breathe a freshness into the American theatre wing of our culture.

For more information and to reserve your tickets, go to: www.atgr.org