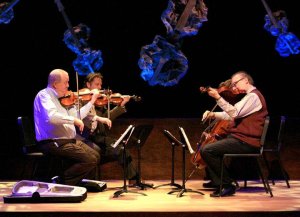 How better to warm up on a cold night than with great theatre?  There are just three more chances to see Opus at Actors’ Theatre.  Please note, that while the GRCC Campus is closed due to weather, the show will still go on!  You can still purchase tickets online at www.atgr.org, or the box office will open this evening at 4 PM.

Want to learn more about the show The Grand Rapids Press called a “a work of art”?  Head over to WGVU’s website and listed to Shelley Irwin’s interview with the cast or, check out the photos from the show on Actors’ Facebook page.

“Opus” in On The Town

There are just three chances left to see the play Grand Rapids’ Press writer John Phipps called “a work of art.” Interested in learning more about this amazing show? See what writer Kristin Austin had to say in On The Town:

When preparing for a concert, musicians face pressure and passion that provide drama all its own.

That is why former concert violist and now playwright Michael Hollinger thought the work it takes to prepare for a performance would translate into a good play. So, he wrote Opus, the drama-filled and often humorous story of the Lazara String Quartet. Three of the quartet’s members fire the fourth, a talented but troubled violinist, and hire a gifted young woman unsure of her career path as they prepare for the performance of their lives.

Actors’ Theatre will present the West Michigan premier of Opus this month. Director Jeralyn Pinsky said she simply fell in the love with the play and hopes the audience will too.

“Opus is ninety minutes of the world of a string quartet,” she said, describing the play as “classical music with witty, bright, and interesting characters and relationships, unique staging, and beautiful music. And, of course, dramatic conflicts.”

Grand Rapids Symphony Music Director David Lockington agreed drama can stem from the pressure and emotions musicians feel during the rehearsal process. “We all have to pace ourselves so that, like athletes, we peak at the time of the performance,” he said. “The demands of playing together and in tune are enormous. It requires great technical skill but also an ability to listen beyond your own instrument or small group surrounding you.”

Lockington continued, “Of course we are all flowing with the emotions of the music, but we are also having to communicate with our colleagues on a very intimate level and sometimes this can be difficult. Communication is, in general, quite difficult. We have to be strong in our convictions and vulnerable at the same time. Somehow we have to trust each other!” …

(Read the rest of the article here, on www.mlive.com)

Check out the review in The Grand Rapids Press by writer John Phipps:

In music, an opus is a work, and its number shows the order in which it was composed.

Well, throw out any thought of order and move Actors’ Theatre’s presentation of “Opus” straight up to No. 1, because it is a first-class piece of work by all concerned.

Clear your schedule for one of the remaining performances, and go get your money’s worth in prime theater while you have the chance.

Beautifully orchestrated by Grand Award-winning director Jeralyn Pinsky and an ensemble cast of four Grand-winning actors and a talented newcomer, this one is a solid winner. And it deserves much more of an audience than Thursday’s opening night crowd, which, while appreciative, was lucky if it populated half the 230-seat Spectrum Theater, 160 Fountain St. NE.

Too bad, because the work is a tour de force that shows what clever, rapier script-writing, adroit, fast-paced direction, supple, nuanced acting and artful use of lighting can do to fire an audience’s imagination into seeing a minimal stage set as a rehearsal hall, concert venue, apartment and backstage room at the White House.

And although players in a string quartet on stage clearly are not really playing, they are perfectly believable as world-class musicians with all the joys, hang-ups, talents and foibles of any four people thrown together in a common endeavor…. (Read the rest of the review here on www.mlive.com)

Good news!  There are still tickets available for this beautiful show!  Be sure and order them today.

Go to www.atgr.org for more information, or call our box office at (616)234-3946. Box office hours are Monday through Friday from 1:00PM until 5:00 PM. The box office will be open from 1PM until show time on the day of performance.

Spectrum Theater is located at:

“Opus” In the Grand Rapids Press

Check out this excerpt from an article about Opus by Grand Rapids Press writer John Phipps! (Be sure and go over to www.mlive.com to read the complete article.)

GRAND RAPIDS — How’s this for a nightmare? You land a position most people in your field would kill for, only to learn that your job performance will be evaluated by one of the most powerful executives on the globe.

And your success will depend on how you handle being sucked into a vortex of passions, tensions and personalities generated by three complex co-workers who demand nothing less than world-class achievement — all under the scrutiny of a national TV crew.

Welcome to the world of Grace, a gifted young viola player who must wonder why she turned her back on an audition for a safe orchestra chair in favor of this swirling unknown in Michael Hollinger’s “Opus.”

The award-winning, one-act drama with comedic edges gets its West Michigan premiere by Actors’ Theatre this weekend in Spectrum Theater with a star cast and director….

(Read the rest of the article at www.mlive.com)

Members of the cast of Opus rehearse their instruments with advisor Diane McElfish Helle.

The world-class Lazara String Quartet is struggling to prepare for their highest-profile performance when they decide to fire their brilliant, yet mercurial, violist. When a young woman is hired as the replacement, her gifts inspire them to attempt a musical feat of epic proportions.

The rehearsal room becomes a pressure cooker as passions rise, personalities clash, and the musicians are forced to tackle life, love, and the ephemeral nature of their work.

“a taut, smart, thoroughly entertaining drama about that most rarified of heady glories, the string quartet”
—Newsday