“Reefer Madness” SOLD OUT on May 28th 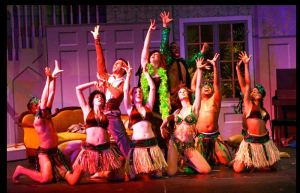 Reefer Madness! The Musical had sold out performances on opening night and Saturday, May 28th. The Grand Rapids Press gave Reefer Madness a 4 out of 4 star review and called it “just about as much fun as you can have without breaking the law.” Tickets for this upcoming weekend are going fast, so make your reservations today!

Or, you can order your tickets anytime online by going to our website at www.atgr.org

In 1936, American propaganda exploitation film Reefer Madness! hit the scene, going on to become not only one of the most important comic revelations of almost every college freshman who had just discovered the wacky weed, but also a bit of a cultural lightening rod as a war on drugs would ensue under its unbalanced weight.

The film main character is really “marijuana,” a drug known for its calming effect that, when mixed with Jazz and hormones, becomes a weaponized substance resulting in a hit and run accident, manslaughter, suicide and other acts of madness.

Over time, Reefer Madness! was re-edited and even re-titled, so it should be no surprise that a musical comedy version would be created in 2005 based on this slim-on-the-facts film.

And what fun for theatre-goers that it has been adapted for the stage, where all sorts of havoc can be created in a uniquely theatrical style.

(…read the rest of the article here, on Rapid Growth Media…)

Want to learn more? Go to the Actors’ Theatre website, or check out our Facebook page for all the latest and to see photos of the cast!

Opening Tonight: “Reefer Madness!” Check Out This Article in The Grand Rapids Press

Actors’ Theatre’s final production of the 2010-2011 Season, Reefer Madness, was featured in The Grand Rapids Press recently. Check it out: 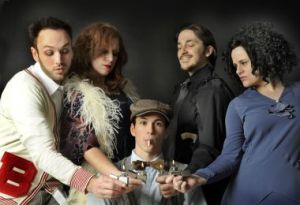 GRAND RAPIDS — Have you heard about the menace of marijuana? According to the 1936 film “Reefer Madness,” the deadly drug is “Public Enemy Number One,” a scourge of society. Just one puff causes uncontrollable laughter, followed by emotional breakdown, violence and incurable insanity. No mention of the munchies.

Although written as a serious warning to parents, the film is so overly melodramatic that by the 1970s it had become a cult comedy, inspiring a 2001 musical satire and 2005 movie.

“It is campy, fun entertainment,” said Chris Grooms, who is directing the musical for Actors’ Theatre that opens Thursday. “But it has a history. There are factual references, statements people actually made that show how ridiculous the fears were at that time.”

The plot is similar to “The Rocky Horror Show” in that a pair of young innocents are corrupted, but in “Reefer Madness” the couple are seduced by demon weed instead of a mad scientist.

“People who like ‘Rocky Horror Show’ will like ‘Reefer Madness,’” Grooms said. “It has a similar style. Both shows go over-the-top.”

…be sure and read the rest of the article from the Grand Rapids Press, here on www.mlive.com

Actors’ Theatre’s “Reefer Madness” in On The Town Magazine

Check out this great article from On The Town Magazine about our final show of the season, Reefer Madness.  Tickets are seeing fast, so if you are interested in seeing this fun, campy musical, be sure and call the box office right away!  (To contact the box office, please call (616)234-3946. Box office hours are Monday through Friday from 1:00PM until 5:00 PM. The box office will be open from 1PM until show time on the day of performance.)

Actors’ Theatre Closes Season with Reefer Madness, a Musical Satire of the 1936 Film

By: Caroline Higgins – On The Town

The Actors’ Theatre Grand Rapids has something completely different up its sleeve. The troupe is currently working on Reefer Madness, an unpretentious musical comedy that is purposefully over-the-top and outrageously goofy.

The musical is a satire of a 1936 film of the same name, which depicted exaggerated dangers of marijuana use in order to warn parents about the drug so they could keep it away from their children. The film Reefer Madness gained significant popularity only when it resurfaced in the 1970s and became a comedic cult film for supporters of the decriminalizing of cannabis. The musical satire premiered off-Broadway in 2001, with book and lyrics by Kevin Murphy and music by Dan Studney. USA Today wrote about the musical, praising it as a “delirious romp, which at its best reaches highs of intoxicating goofiness.”

…read the rest of the of the article here on www.mlive.com

Up Next – Reefer Madness! – the Musical

It’s 1936 and Jimmy becomes a murderous fiend after being led astray by the “devil weed” Marijuana. He mouths off to his parents, steals from the poor box, brutalizes small animals and (GASP!) even tries to tongue kiss his shocked girlfriend!

Attempted interventions and pleas by Mom and Jesus (accompanied by backup angels) go unheard and soon Jimmy’s on the lam in a stolen Packard in this campy, over-the-top new musical. It’s safe to say that “with Reefer, there are no happy endings.”

“I doubt that even the staunchest opponent of mind-altering substances could resist entirely the effects of this delirious romp, which at its best reaches highs of intoxicating goofiness.”
– USA Today